It’s not a big “hack” in the episode, but we see MacGyver walking through the build a refrigerator.  You could use solar power and a battery with a normal fridge, but there is also the peltier cooler option.  The peltier is a small solid state device – when you run current through it, one side gets hot and one side gets cold.  You can use this device to cool the inside of a fridge.  It’s not super efficient, but it’s very simple.

Actually, I started to build one (but I haven’t finished).  Here is my progress so far.

So, Oversight builds a homing beacon.  He sets the frequency to 457 kiolhertz.  MacGyver needs to modify the radio to pick up this frequency.  He needs to make the modification because a normal AM radio only goes down to about 540 kHz.

So, how do you change the tuning frequency of a radio?  Let’s look at a super basic radio (a crystal radio). 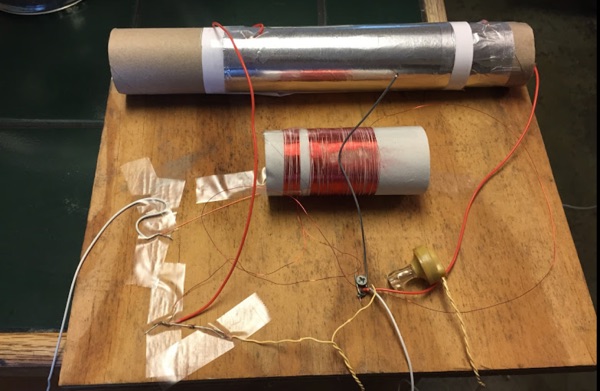 I love the parts where MacGyver and Oversight argue about physics stuff.  Here are some notes about their discussion.

How fast would you be moving after a drop of 50 feet?  Let’s go over this calculation really quickly.  I hate imperial units, so I am going to switch to metric.  Since it’s about 3 feet per meter, 50 feet would be about 15 meters (rough approximation).

When an object falls, it has a constant acceleration of – 9.8 m/s^2 (assuming no air drag).  That means that for each second that it falls, it will increase its speed by 9.8 m/s.  We can write this as:

Since the falling object starts from rest, the initial velocity is zero.  We can then solve for the final velocity.  Oh, this is all in one dimension.

Oh, I am assuming the initial time is also zero. But we don’t know the time the object falls.  Let’s look at the two definitions of average velocity:

I can use this with the previous equation to eliminate time.

Fan motor as a brake

MacGyver lets a rope wrap around a spinning fan motor.  He then uses that to go down a building (not slow – but slower than falling).  Yes, this is plausible.  It would be better if the motor is on since then there will be a resistance to spinning it.

I could probably say more about this – but it would get complicated quickly.  Oh, how about this – a motor is the same as an electric generator.  It just depends on how you use it.

This site uses Akismet to reduce spam. Learn how your comment data is processed.