This comes up every so often. I get a situation (usually, it’s a video analysis problem) in which I can’t rely on the time data. This usually happens when you can see the motion of a projectile, but the middle part (or all of it) is in “slow motion”.

Before looking at the trajectory equation, let’s review what I would normally do for a video analysis. After collection x,y,t data in each frame, I could make two plots. I could plot the horizontal position vs. time. This should be a straight line (because there would be zero acceleration) and the slope of this line would be the horizontal velocity.

The second thing I could do is to plot the vertical position vs. time. This should be a parabola. From the quadratic equation fit of this data, I can find the vertical acceleration.

So, let’s say I can’t do that. How do we get data from an x-vs-y plot? This is the trajectory since it actually shows the path of the projectile. OK, for this case let’s make the following assumptions:

Now for the physics. First, the initial velocity can be broken into x- and y-components:

For the x-motion, I have the following kinematic equation:

And in the y-direction:

In order to get the trajectory equation, I need to eliminate t from these two equations. I’m going to start by solving the x-motion equation for t.

Now I can substitute this into the y-motion equation.

Oh, notice that the velocity terms cancel in the middle term. Also, we get sine over cosine which is tangent.

This should be good enough. If I make sure that the ball starts at x = 0, then the x-squared term of the quadratic fit in the format of:

Where A, B, and C are fitting coefficients. Now, A should be:

So, if I have data and I plot the trajectory, I should be able to find the acceleration. Of course, this assumes that I know the launch velocity and the angle. But wait! I can get the angle from the B term:

Let’s test this stuff out. I could use some video data—but it’s easier to just make a plot in python. Here is a ball launched (with initial x = 0 meters). I get the following for the vertical position vs. time (like I would expect). Here is the code.

That looks good. Now, I’m going to plot two trajectory lines. The first will be calculated in the normal numerical calculation method (same as above but plotting x vs. y instead of t vs. y). The second plot will be the trajectory equation we solved for above. Here’s what I get.

The plots aren’t identical—but I could easily fix that. This shows that the thing works. 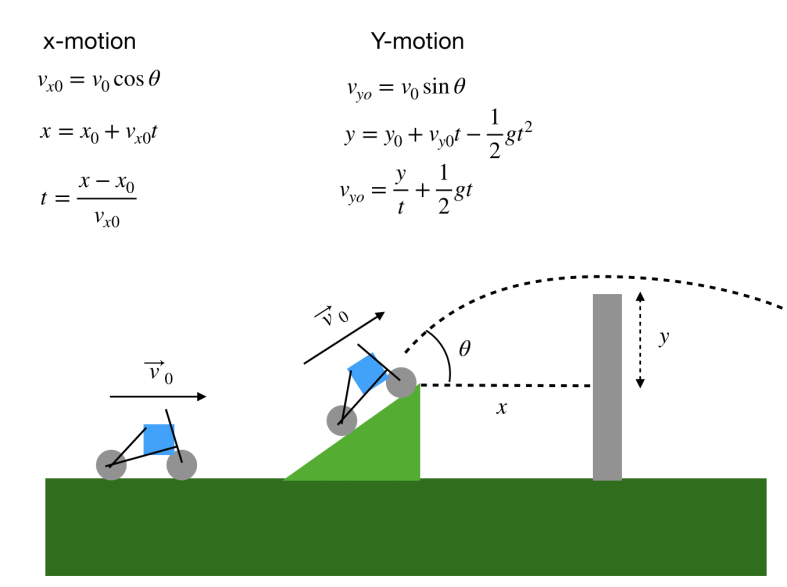 There aren’t a bunch of hacks in this episode—so that means I can just write about whatever I want.

This is just classic MacGyver stuff. I really don’t have anything to add.

Now we are talking. Why are these power lines high voltage? To answer this question, we need to first think about three things: power, voltage, current.

Let’s start with power. This is the rate of energy change (or in this case, energy loss). For an electrical circuit, the power loss is equal to the product of voltage and current.

But wait! There is also a relationship between voltage and current.

Where R is the resistance (in Ohms) of some element. Substituting this definition into the power definition:

So, here is your answer. You get more power loss with a greater current. That means the best option is to have low current power lines. But if you want to transmit power—you have to make up for this with high voltage. Boom. There’s your answer. OK, technically these power lines are alternating current and voltage, but the main idea still works.

Next question. What happens if you touch a high voltage line. The answer: not much really.

Yes, if you touch a high voltage line AND something else—like the ground then you will get zapped. The thing that really messes up humans is an electric current running through them. If you just touch one line and nothing else, there is no complete circuit. With no complete circuit, there is no electric current. Oh, this is why those birds can sit on power lines. As long as they only touch that one line, they are fine.

Belay from a lock

The key to a belay is friction. This is actually a pretty cool thing—the more turns a rope has around something (like a post), the greater the friction. You can control the amount of friction between the pole (or padlock in this case) and the rope by slightly varying the amount of rope around the pole.

I think I need to do an experiment to show this—maybe I will do that later. In the meantime, here is a nice tutorial on belays.

Oh, but what if MacGyver wanted to express his anxiety about heights by calculating the impact force if he fell. His calculation might look something like this.

MacGyver and Desi need to jump a fence with motorcycles. Here’s what he might calculate to find the minimum motorcycle speed to make the jump.

Scale of the Line Rider

First, we assume that the line rider is on Earth and for low speeds will have a free-falling acceleration of 9.8 m/s2. Next, an arbitrary distance is selected. In this case the length of the sled is chosen to be 1 LU (Linerider Unit).

The goal will be to put the linerider in a free fall (where air resistance should be able to be ignored) and determine his (it could be a she, it is difficult to tell) acceleration in LU/s2. Then we can determine the conversion factor from LU/s2 to m/s2.